Nathan Chen, the Team U.S.A figure skater and “Quad King”, has succeeded in taking the gold in the men’s figure skating contest at the Beijing Games after successfully completing an incredible run of quadruple jumps.

Fittingly using Elton John’s “Rocket Man” as his song of choice, Chen started his gold medal-winning performance with a quadruple flip and triple toe loop. From there the Quad King seamlessly transitioned into another set of impressive, one of which was the difficult and complex quadruple lutz.

Chen scored a whopping 332.60 points, the points in large part thanks to his successful landing of five consecutive quadruple jumps. The skill at which he managed to complete the jumps come as no surprise, there’s a reason Chen is called the “Quad King”. Quad jumps are Chen’s specialty, proving that during the Pyeongchang Winter Olympics in 2018 which saw him become the first skater to ever land six quadruple jumps in a single performance.

The runner-ups for the men’s figure skating contest were two Japanese skaters – Yuma Kagiyama winning the silver with 310.05 points while Shoma Uno won the bronze with a score of 293 points. 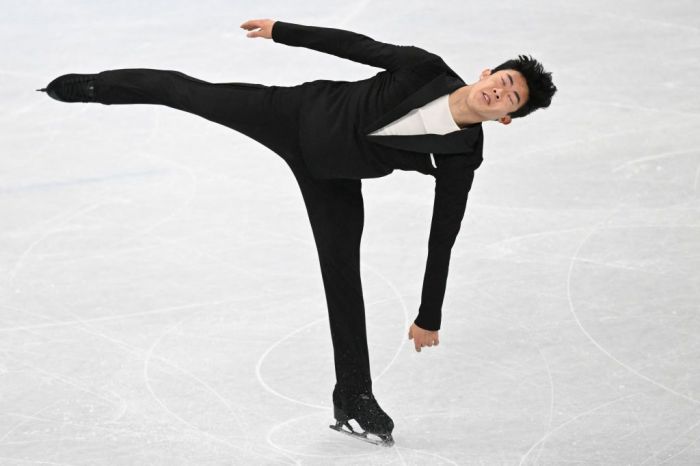 Chen was already the skater to watch going into the performance, he had already successfully won and maintained the world-record score of 113.97 in the short program. Chen was the favorite to win the gold, which would be his first gold at the Olympic level. The favoritism was in part due to the failure of his biggest rival Yuzuru Hanyu, Japan’s “Ice Prince,” who made some glaring mistakes in his performance. Hanyu’s mishaps saw him slipping from the reigning champion with two gold medals to fourth place with a score of only 283.21 points.

Chen’s win is something of a redemption arc for the 22-year-old skater. Chen only placed 5th at the Pyeongchang Olympics in 2018, the competition was his Olympic debut.  But since, Chen has been on a winning streak, winning 14 competitions consecutively before his return to the Olympic stage.