McGregor Afraid Of Makhachev, According To Ali Abdelaziz
By Andrew Parker - October 29, 2021

According to Islam Makhachev’s MMA manager, Ali Abdelaziz, Conor McGregor would “choose jail” over being “locked” in a cage with Makhachev. Makhachev is proving himself to be a rising star in the ranks of the UFC’s athletes and looks set to be a top contender for the lightweight championship, which McGregor, one of the UFC’s most infamous fighters, won the title 5 years ago.

Known for his Dagestani sambo specialty, Makhachev has an upcoming lightweight match against Kiwi striker Dan Hooker on the main card of the UFC 267 event being held in the Etihad Arena in Abu Dhabi this weekend. Makhachev is currently ranked fifth in the contender ranking for the lightweight class but should he prove himself against Hooker, he could see himself being placed in one of the top spots. Achieving that could land him in the ring with Mcgregor. 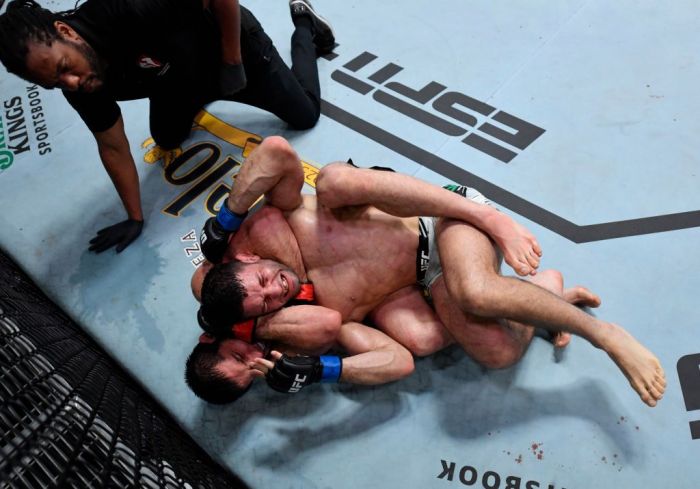 However, Abdelaziz doesn’t seem to think this will be likely. In Abdelaziz’s opinion, McGregor is far too afraid of his client to step into the cage with him.

“Being locked in jail or being locked with Islam Makhachev? I think he would choose jail,” Abdelaziz said to MMA Junkie.

Regardless of how McGregor may or may not feel about a match-up with Makhachev, it’s unlikely that he will be competing until at least mid-2022. The fighter is still in recovery after his recent bout with Dustin Poirier, in which he lost for the second consecutive time to his lightweight rival and broke his leg.

When Makhachev was asked directly if he would be interested in fighting McGregor, his answer was that he had no motivation to seek a fight with the Irishman. McGregor hasn’t taken home a consequential win since his victory over Eddie Alvarez five years ago.

“I just want to fight for the title,” was Makhachev’s reply.