Hailie Jade Scott Mather, daughter of rapper Eminem, was in attendance of the 2022 Super Bowl to show supper for her father’s halftime show – and to show support for the LA Rams and their quarterback Matthew Stafford.

The halftime show was one for the books, a favorite for many, and one of the most talked-about events of the month – almost surpassing even the Super Bowl itself for its virality and the attention it garnered. The show was truly a star-studded event, featuring many of the biggest names in Hip-Hop and popular music from both contemporary music and rap history; sharing the stage with Eminem were the likes of Kendrick Lamar, Mary J. Blige, Snoop Dogg, 50 Cent, and the incredible Dr. Dre.

“Here for the halftime show, staying for Stafford,” Hailie Mathers, Eminem’s daughter, wrote in the caption of a photo she posted to Instagram, the accompanying photo being of her above the football field at Inglewood, California’s SoFi Stadium. The Stafford in question is most likely the quarterback of the LA Rams. Stafford enjoyed a victorious Super Bowl Sunday, leading his team to victory on the day. 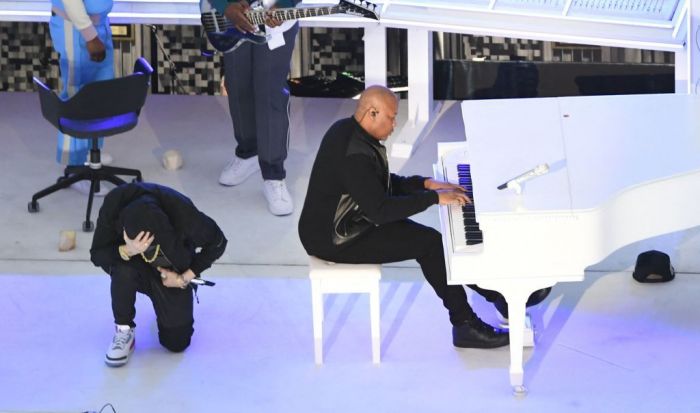 Besides being the daughter of one of the most famous musicians currently working today, Hailie Mathers is herself an influencer with a large following. Mathers has over 2 million followers on Instagram, which she uses as a platform for her own brand of lifestyle, fashion, and beauty content. She kept her followers in the loop of her Super Bowl attendance with a steady sharing of photos and videos of the event and her father’s performance.

Eminem gave a crowd-pleasing show, playing many of his biggest hits from years past, included in the song lists were favorites like “The Next Episode,” “California Love,” “In Da Club,” “Family Affair,” “Alright,” and “Lose Yourself.”