Devonta Smith Says He Has A McDonald's Breakfast Every Game Day
By Andrew Parker - December 17, 2021

DeVonta Smith, rookie wide receiver for the Philadelphia Eagles, says he has a hearty McDonald’s breakfast every game day. The 23-year-old athlete describes his pregame snack, which consists of a Chicken McGriddle Sandwich (a waffle sandwich with fried chicken as the filling and maple syrup as the condiment), two hash browns, and a glass of orange juice. Surprisingly, some nutritionists say that this sugary refill isn’t the worst snack a young athlete could have before a day spent out on the field.

“McDonald’s breakfast is my go-to, it’s just something I’ve always been doing,” Smith said to Insider. The conversation followed Smith’s surprise for some lucky young athletes in New Jersey when he donated to each of them a $150 gift card to Dick’s Sporting Goods. Smith recently became the first and only athlete to be endorsed with the Dick’s Sporting Goods men’s VRST clothing line. “With me being me, I try to keep things traditional.”

Smith’s usual pregame meal comes to a rough total of 810 calories, 30 grams of total fat, 46 grams of sugar, 122 grams of carbohydrates, and 20 grams of protein, according to the  McDonald’s nutrition calculator. 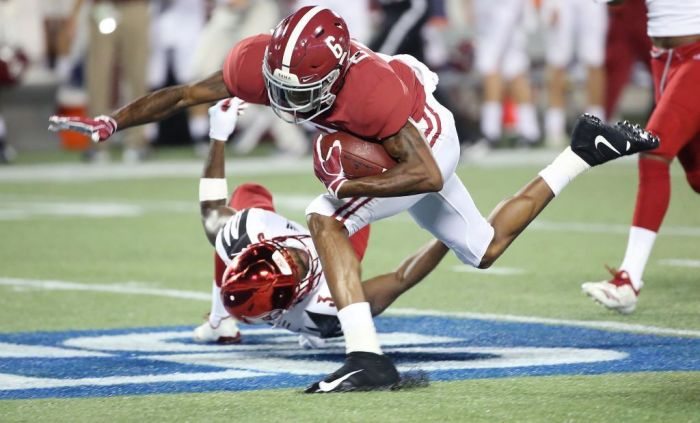 That breakfast would be considered by many to be far closer to a dessert time treat than a snack before a long day, but for Smith and his level of physical exertion, it can be a sustainable choice, according to some nutritionists.

DeVonta Smith is 23 years old, measures in at 6’0, weighs 170 lbs, and is a professional athlete has a daily requirement of 3,100-3,500 calories, and that’s just to keep him at his current weight, according to Insider who spoke to a registered dietitian Alix Turoff.

“If we put it into context, his 900 calorie breakfast is about a third of his day which is reasonable,” Turoff told Insider. “That being said, for 900 calories, he’s not getting very much protein or fiber so there are certainly better options out there.”