Conor McGregor Sets His Sights On The Welterweight Belt
By Alexandra Wade - March 22, 2022

Conor McGregor has come out with a challenge to both UFC head Dana White and to the welterweight champion Kamaru Usman. The challenge issued sees a significant change in the tactics of McGregor in his attempted comeback since his now twice defeat at the hands of Dustin Poirier, the last of which saw him breaking his leg and having to take an extended leave of recovery from the octagon.

White has shown interest in McGregor’s challenge. The match would see McGregor relocating to a different division within the UFC. For much of McGregor’s career, he has competed at the lightweight division but the last few years have not been kind to McGregor in his attempts to continue being the reigning champion of the division.

Rather than continue on what seems to be an unsuccessful petition to get back into the ring with a shot at the lightweight title, he has shifted to shooting a shot to claim the welterweight title from Usman. 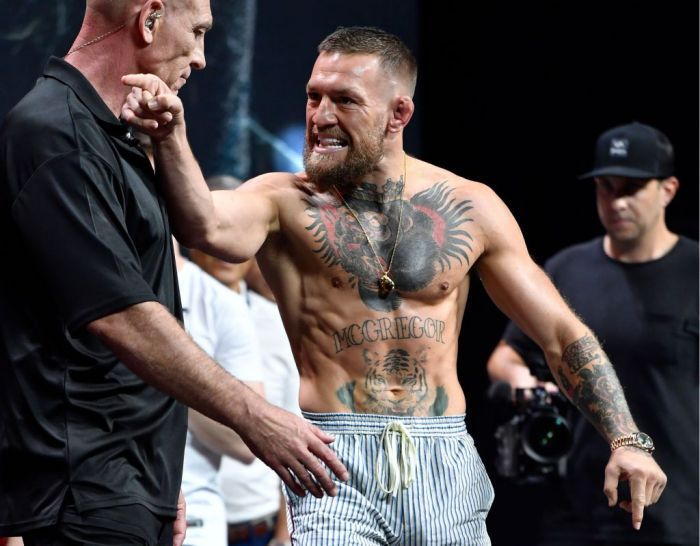 The proposal was given via a video on the world’s most famous UFC fighter’s YouTube channel, MacLife. It followed the news that McGregor would not be joining the UFC International Fight Week in July after initial hopes that he be returning for the headlining fight. In the video McGregor said:

“Myself versus Usman for the 170-pound title in my comeback fight is the one I’m eyeballing at the minute,” he said. “Why cut the weight? I’ve already won the 155-pound title. I got myself to a lightweight frame, but you know, I’m big now. I feel big. I feel strong. I feel healthy. I’ve got good energy… I’m coming back from a gruesome injury. I don’t want to be depleting myself. There should be no need to deplete myself.”

McGregor concluded the video by saying that he was “very excited. There is history to be made. This game needs to be shook up. Again. The triple crown has never been done.”